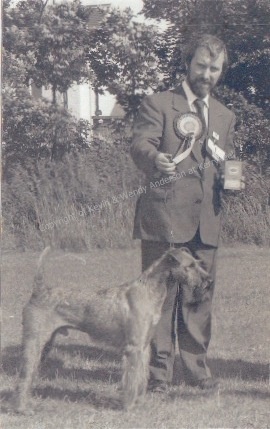 The death occurred recently of Eng Ch Edbrios Duplicate, England’s infamous Top Stud Dog for eight consecutive years, 1991 to 1998 inclusive. He was bred by Eddie and Philip O’Brien in 1988 and was the result of a strong belief of Philip’s that Nero and Edbrios Kim would produce something spectacular for them. I do not believe even they could have dreamed just how influential and prolific Duplicate would become within Irish Terrier circles.

The All Ireland Irish Terrier Club show was his debut in the show ring, and under Susan Kealy he won the puppy class. Duplicate was then, by prior agreement transferred to Tommy Murphy’s ownership and after a brief period was then sold on to Kevin Anderson where he was to remain for the rest of his days.

His English title was earned in 1991, and amongst his CC’s was one awarded at Crufts with BOB, under Charlie Pollard. In those days Anglea Rippon did the commentary for the BBC programme and to Philip and Eddie’s pride and delight Duplicate with Kevin Anderson at the helm, was short listed in the last six of the Group and featured on the programme.

To list Duplicate’s, or Barney as he his known to Kevin and friends, progeny that have attained top awards would take far too long but here is a brief synopsis of his top winning descendants. Eng Ch Lynphen Katie (Top IT), Eng Ch Mickey Finn who went on to Sweden and has gained top awards there, Ch Galway Gambler at Irvonhill (Top IT), Eng Ch Fairywell’s Golden Chance, Eng Ch Naranja Jumping Jack Flash (Top IT), Int Ch Chantelle Guinness (Top IT Europe, 1999), Eng Ch Brazan Riesling and Int Ch Ben’s Heir Ed, who along with owner Hans Gruttner took BOB at the World Show in 1994.

Duplicate is also the sire of Eng Ch Montelle Star Return who is the matriarch of the present top winning Montelle stock. The list above is mostly confined to English bloodlines as his influence was most remarkable in the UK, but it would be incorrect to say that his progeny are situated only in the UK as this is certainly not the case.

It had always been Philip’s intention to incorporate Duplicate back into his line and in 1998 he finally took the opportunity with his Ir Ch Rutlan Sally, Duplicate’s half sister. From this mating Philip ran on one bitch, Edbrios Slaine and although lightly campaigned she already has one CACIB, one CC, incidentally given by Ferelith Somerfield who also awarded Duplicate one of his CC’s, and she is well on her way to her Irish title.

Duplicate is also present in Irish top winning lines, notably his daughter, Eng and Ir Ch Fintona Karisma, bred and owned by Johnny and Bernie Mc Govern, and her daughter Ir Ch Fintona Georgie Girl owned by Con Hackett. Karizma is related to Duplicate on both her maternal and paternal side, as her grand dam on her mothers’ side is Edbrios Kim. John Canty’s, Ir Ch Earl of Codinavilla, is a grand son of Duplicate and he recently won Best of Breed at the All Ireland Irish Terrier Club show to complete his title.
Lindsay Williamson (Naranja) writes; “I know how sad Kevin Anderson must be after the death of his Eng Ch Edbrios Duplicate, who sired many Champions, and whose latest offspring (Edbrios Slaine) recently won BCC at the Ulster.

Duplicate was an important and excellent influence on the breed and one hopes that his genetic inheritance continues to live on. A stud of such merit would be a case in point for storing semen.”

Philip O’Brien commented. “I believed the combination of line breeding to Swinpen Bright Boy and Telltown Commonder Rolf was the way forward for the Edbrios line at that time. I had a picture of an Irish Terrier in my mind and my goal was to breed to that type. It goes without saying that a breed must evolve and improve to survive. It is, I believe, difficult to breed quality dogs, true to type and full of showmanship consistently. Duplicate has borne true my faith in that mating and I am extremely happy he has proven so successful.”

One can only imagine the devastation that Kevin is feeling at the loss of this highly successful dog and long time friend. Once time has distanced him from the sadness he can reminisce and enjoy with pride owning Duplicate.

In 1999 alone of the five Irish Terriers gaining their English titles four of them were descendants of Duplicate’s, a record that continues to be astounding. Without reservation it must be commented that he has improved the breed as his proficiency of siring top quality stock speaks for itself. He was used at stud for many reasons, most especially, his movement and his ‘type’. He, through his prolonged successful progeny has written himself into the history books and will remain legendary in the breed.